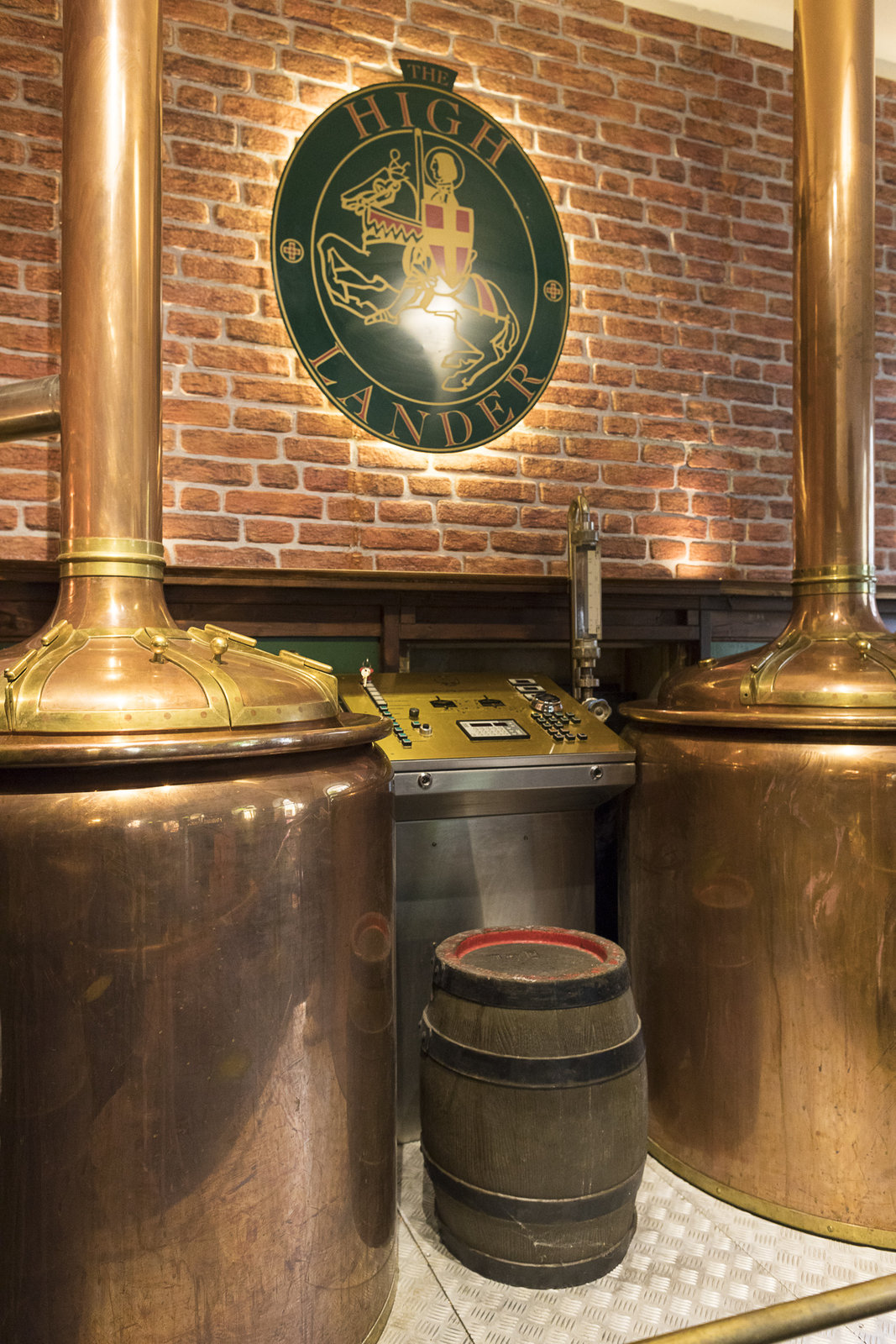 A pub brewery like the Highlander’s  where we’ve been brewing our own beer, consists of three areas:

1. The brewhouse - the heart of the brewery with its shiny copper kettles

3. The storage cellar with beer lines leading to the taps

Let’s take a look at how beer is made:

The brewhouse consists of two round vessels – the so called mash kettle, which later change to the wort kettle and the lauter vat.

The mash water is introduced to the mash kettle – we use water of the Viennese spring water line. This drinking water is ideal for brewing and needs no further preparation.

At 52°C, the milled malt (or “grist”) is added. The kind of malt used in this step determines which type of beer that is produced. The mix of water and malt is called “mash”. Through constant heating of the mash (up to a maximum of 78°C), its flavours and colour are infused into the liquid. After about 90 minutes – depending on the recipe – the mash is pumped into the lauter vat.

In the lauter vat, the solids of the mash are separated from the liquids, by pumping the liquid through a slitted floor into the wort kettle. This liquid  – the so-called “wort” –  tastes very malty and sweet. The original gravity – either in degrees or as a percentage – denotes the amount of dissolved malt sugars. This is an essential criterion for flavour and the type of beer produced.

After lautering has finished and the wort kettle is filled, the liquid is heated to boiling temperatures. While boiling for 90minutes, the hops are added in the form of pellets, the amount and type varying depending on the recipe and the type of beer. The addition of hops happens on a schedule, on average three times. If the wort is tasted at this point, it has an unbalanced bittersweet flavour.

The whirlpool and wort cooler

The wort is fed into the whirlpool at boiling temperatures, and due to the so-called tea leaf paradox, the hot trub (undissolved proteins, hop resins and malt particles) form a cone-shaped sediment in the middle. After a short rest, the wort is pumped into the wort cooler. Here, liquid is cooled to pitching temperature (8°C-20°C depending on the type of beer) and oxygenated. The cooling water is heated to about 60°C during this process and is used as the mash water for the next brew.

In the fermentation tank, the pulpy yeast is added – or “pitched” – into the oxygenated wort. At this point in the process, the liquid is called “beer” for the first time – namely, “green beer”. The addition of the yeast starts the process of fermentation. The yeast converts the long chains of malt sugar into alcohol, carbon dioxide and heat. After the primary fermentation has finished, the green beer is transferred from the fermentation tank to the storage tank.

In the storage tank, the beer undergoes secondary fermentation and maturation. During storage, the carbon dioxide can’t escape and the beer is carbonated. Yeast and other remaining particals sink to the bottom of the tank. After about 4 weeks, the master brewer taste-tests the beer. With his approval, it is transferred to the dispensing tank.

In our brewery, all the liquid is filled into a keg connected to the dispensing system, so that the beer kegs do not have to be disconnected and reconnected separately. Another special feature of the system is the storage of the beer in a special bag – it is then pumped to the tap with air. This bag prevents the oxidation and over-carbonation of the beer.